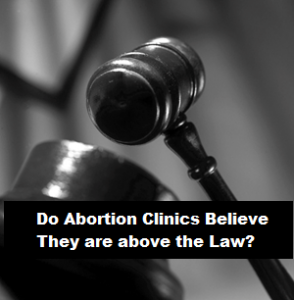 Most people believe that abortion, the taking of an innocent human life, is morally wrong.

Because of this, most people would also find some comfort in the fact that abortion clinics at least have a certain amount of regulations with which they must comply.

However, there is actually a lot of evidence to suggest many abortion clinics are not even following the few reporting guidelines that are in place.

A review conducted by the Chicago Tribune found that, ” The state’s system for tracking abortions is so broken that regulators also may be missing more than 7,000 of the procedures per year” [1].

In reality, details are supposed to be collected about every procedure.

One of the many implications of this is that the safety of women is definitely not the primary concern of these clinics.

They believe they are above the law and, in maximizing their revenue, harm to women’s health is an acceptable loss to them.