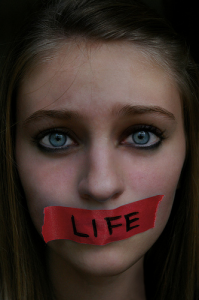 Being pro-life is not always easy. We have to be strong in our beliefs, unafraid to share them, and always ready to respond to those who vehemently disagree with us.

It is quite possible that others, sometimes authority figures will challenge, argue, and attempt to embarrass you.

However, it is important to know that you do have rights. Freedom of speech allows pro-lifers to peaceful congregation and protests.

If only pro-lifers were less afraid to put their arguments out in the public forum, we might have a completely different society.

Most people identify more with the pro-life side, in general. They agree that having an abortion is morally wrong and should not be allowed in all or all but a few instances [1].

There are many others who say that they would not personally have an abortion, but cannot stop others from doing so.

These are the people that we need to reach out to, educate, and challenge to evaluate the basis of their claims.

Do most of these people realize that the preborn fetus is a living member of the human species? Most likely, the answer is yes.

According to scientific research in social psychology, when a person publicly encounters an issue (such as abortion) and a clear majority of the sources of exposure are of a certain viewpoint (such as being pro-life), then that person is likely to accept that view as the prevailing social norm [2].

While there is no precise statistic that holds true universally, a good estimate is that pro-lifers must aim to have the pro-life view be the clearly dominant view about 2/3 of the time in order for people to recognize it as being the prevailing social norm.

Speaking in public is not always fun or comfortable, but it is vital for all of us to do in order to create a stronger culture of life.