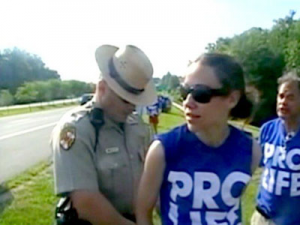 Over the past 4 decades, there has perhaps been no issue that has polarized Americans more than the issue of abortion.

In light of this, perhaps it should not be surprising that those who protest against abortion are often subject to a variety of disapproving looks, gestures, and actions.

Sometimes those who are pro-choice take such offense to pro-life advocates assembling that they call the police to come.

However, is this really justified? Can police ever legally put a stop to a protest against abortion?

There is actually not a definitive answer to this question.

It depends on if the public remains safe. If law enforcement tries to shut down a pro-life activity because someone complains, they cannot legally shut it down. If they shut it down, it takes away from the pro-lifers 1st amendment rights.

That being said, pro-lifers generally need not worry. One would be very hard-pressed to find any pro-life protest that has qualified as being threatening to any person or organization.