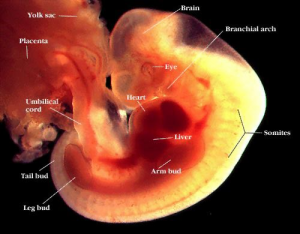 One of the milestones of the first trimester is the development of the baby’s organs, which begins during the fifth week of development. Just a few weeks after this, the head and spinal column will also be formed. The significance of these events is that they allow the baby to make its first independent movements within the mother’s uterus [1].

In the 1970s, there were two studies done on first trimester embryos. In these studies, a progression was observed in the types of movements that babies produce. At first, the fetus can only move spontaneously in rippling motions. Later, he or she is able to produce strong and regular movements.

The preborn baby begins breathing motions during the final weeks of the first trimester. This development is key to a baby being able to sustain its own life after birth. At this point, the nervous system is already functioning and has impulses, independent of the mother, running through it [2].

Although it is not yet able to survive outside the mother’s womb by itself, the preborn baby grows exponentially during the first twelve weeks of the mother’s pregnancy. Beginning as the fusion of two cells that multiply, the embryo becomes the size of a grain of rice and finally emerges as a moving fetus with organs and limbs.