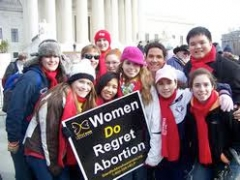 There are some out there who question whether or not it is important to get children involved in the pro-life movement from an early age.

In other words, is it best to focus the pro-life message at adults only?

It is a very big mistake to assume that just because children do not yet have a lot of life experience and are not able to vote that they should somehow be left out of the discussion.

The early childhood years can be very important in the development of the attitudes, values, and beliefs that a person adheres to for the rest of their life.

One of the many examples of this can be seen in the classic Bennington study on college women, in which the impact of group influence on individual attitudes was examined [1], [2].

At this college, the faculty generally held liberal views, but most of the incoming freshman came from conservative families.

What was the impact of this environment on these women after four years?

The majority of these women went from being conservative to being liberal.

Furthermore, this was not some temporary change that reversed once these women left college; subsequent interviews revealed that these women generally kept these liberal views for the rest of their lives.

Had there been strong voices to provide dissent from the faculty and make the case for the alternative view, it is likely that these women would not have been so easily converted.

This is just one of many examples that demonstrates the critical importance of outreach to those who are in college, high school, of even younger.

Instilling the value of respecting life in our children is of critical importance in building a culture of life.