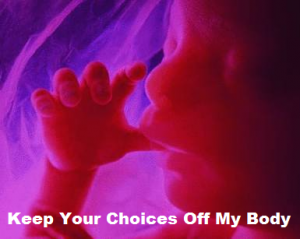 There are many different reasons behind why pro-choice advocates support abortion.

One of these reasons can be seen in the saying:

“Nobody has the right to impose their morals on me!”

However, while many people believe that morals are arbitrary, there are some that are in fact universal truths. The fact that taking a human life is wrong is one such universal truth.

Even though many in the American pro-life movement are Christian, it is important to keep in mind that the role that religious faith serves is to motivate the pro-life movement, not to serve as a legal justification for any type of law.

Religious appeals against abortion can even be made within religious communities, but no one should try to pretend that religion is the only reason to protect human life.

Society believes that killing others is wrong, so individuals who take the lives of others are punished.

Even inflicting pain on oneself is wrong, so society offers help centers to help to those who do it, so they may get better.

Being abusive towards other people is wrong, so society has set up different places where those being abused can go to be safe, as well as places for the abusers to be punished.

Morals can be arbitrary, but not when the lives of other become involved.

Harming another life is always wrong, and that’s universally true.

So taking a life of a preborn, a person, is wrong – not because religion says so, but because we have reached a consensus that no one should be allowed to threaten another person’s life.