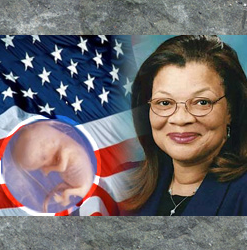 When thinking back on the civil rights movement, one of the first people to come to mind is Martin Luther King, Jr.

King was a champion of human rights for all people.

In a similar fashion, King’s niece, Dr. Alveda King, has carried on the struggle.

Alveda is an activist in both the Civil Rights and Pro-Life Movements.

One of her many well-known quotes is

“How can The Dream survive if we murder the children?”

This quote rings very true in the pro-life movement.

The Dream cannot even begin to be realized by babies who are deprived of their lives.

One reason why abortion is especially troubling to King is because minorities such as herself are much more likely to receive abortions. This is in part because of Planned Parenthood’s strategy of targeting minorities.

Another reason why this is so important to King is because she herself had two abortions early on in her life, and she feels she was very much deceived by Planned Parenthood.

In order for the Dream to be realized by all people, abortion must be ended.