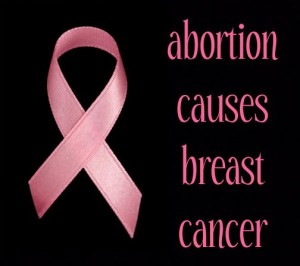 Breast cancer seems to affect almost everyone in some way. Most people have a mother, aunt, daughter or friend who has been diagnosed with breast cancer.

Between the 1970s and 1990s, the incidence of breast cancer has increased by approximately 30-40% [1]. In fact, about 1 in 8 women will develop breast cancer at some point during their lives. This is one of the most diagnosed and most deadly types of cancer in women [2].

The reason for this epidemic in breast cancer is seemingly unexplainable, or is it? Is it possible that abortion, legalized in 1973, may be a cause?

One little known fact is that abortion actually increases the chance that a woman will be diagnosed with certain types of cancer.

In fact, women without any children are at higher risk of both breast and ovarian cancer. According to the Journal of American Physicians and Surgeons, the best predictor of breast cancer is induced abortion.

Increased cancer rates for women who have had abortions are linked to the changes in hormone levels which result from pregnancy and damage to the cervix [4].

Abortion hurts women emotionally, psychologically and physically. Even if a post-abortive woman may seem to be completely healed, the side effects of the abortion may affect her health for many years.

This is one reason why it is so important for women to know all of the facts and health risks before they have an abortion. This decision may have serious consequences for the rest of her life.