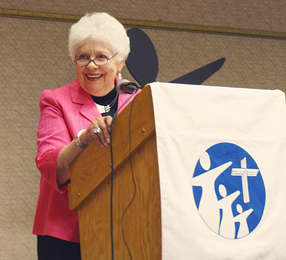 In the 1970s, a woman named Jean Garton found herself pregnant and wanting an abortion.

In her efforts to find comfort in deciding to her abort her child, she joined a pro-choice organization and set out to convince herself that abortion “helps women, doesn’t take a human life, and is a choice God allows us to make” [1].

However, her journey led to her a somewhat different conclusion.

Over time, she came to realize that abortion actually does harm women, does take a life, and is not morally justifiable in any situation.

In her book Who Broke the Baby?, she comments on how society today is so avidly pro-choice.

This book is now a pro-life classic. One of its main purposes is to breaks down pro-abortion slogans for what they really are.

In this book she wrote:

“To say a child is unwanted says nothing about the child, but it says much about the person who does not want his or her child…”

Garton’s quote is referring to the pro-choice slogan, “All children should be wanted.”

The pro-life movement believes that all children should have a chance at life.

Just because the parents do not want the child does not mean that the child is not wanted by others in the world, or that not being wanted by the parents makes the preborn child’s life any less worthy of protection.