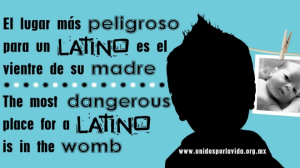 Hispanic women are twice as likely to have an abortion that white women are.

One reason for this could be that there is also a higher incidence of unintended pregnancy by Hispanic women.

This is only one among a number of other health disparities between whites and minorities, especially in sexually transmitted diseases and even certain types of cancer.

Another statistic puts the rate of birth to unmarried parents at approximately forty-five percent [2].

Those who are economically disadvantaged also have higher rates of abortion [3].

Why is it that the poorer members of society are less likely to have families?

Circumstances seem to play a large part. Women may not feel supported in their decision and may not fee they have the assistance necessary to parent a child.

Planned Parenthood alone makes a profit of around one billion dollars each year. As the abortion rate for white women declines, Planned Parenthood knows that it has to make up for its lost profits somewhere else [4]

Planned Parenthood knows and targets neighborhoods with higher populations of minorities, especially Latinos. They attempt to present themselves as pro-family, pro-children and pro-choice.

The abortion industry argues for a woman’s rights, especially to abort her baby, but is against laws about the long terms effects that abortion may have. For an organization that argues to be pro-woman, it seems that Planned Parenthood is willing to compromise the women that they see by not supporting these laws.

Many of their fliers are now in Spanish to attract the Hispanic population. Online campaigns web campaigns are geared toward the Latino community. Advertising for Planned Parenthood appears in Spanish-only newspapers and publications.

There is a term to describe this type of targeting. The term is racism.

One thought on “Latinos and Abortion”