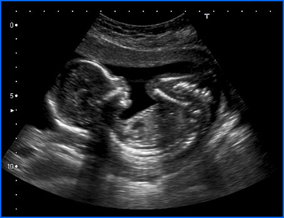 When looking into abortion arguments, there are many questions people need answered to fully understand what they believe in.

One of these questions is, “How can the constitution protect a fetus when it is only a quarter of an inch?”

First, it should be noted that “it” is a pronoun that can only legitimately be used when referring to objects, not to human lives.

Second, it one has to realize that being “pro-choice” is in direct contradiction with the protection of rights established by America’s founding fathers.

As was written in the Declaration of Independence and later included in the 5th and 14th amendments, the human right to life is unalienable. Without it, no other human rights are even possible.

Since human life is supposed to be protected under the law, and scientists have proven that life begins at conception, it is not to difficult to see that our founding documents require us to protect the lives of the preborn.

The right of a preborn child to continue living its life is not subservient to the right of anyone else to take that life, for whatever reason.

Another question that often comes to mind when discussing abortion is, “When is a fetus viable?” Viability means that the baby can live outside of the mother’s womb.

The answer to this question is that a fetus is considered legally viable between 23 and 24 weeks [1].

However, with advances in medical technology, this date has continued to become increasingly earlier.

This is important to consider because some court decisions have implied that a preborn can be given protection at the point when his or her life becomes viable.

However, the fact remains that human life begins at conception and deciding to establish protection at any point after this is entirely arbitrary.

To quote Dr. Seuss, “A person is a person, no matter how small.”

One thought on “Making the Case for Preborn Rights”