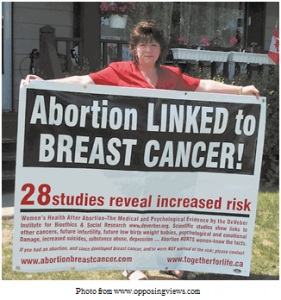 Is there a link between abortions and breast cancer?

The answer is a resounding yes.

In fact, studies show that multiple abortions lead to an even higher risk for breast cancer. Over the past half of the century, the number of cases of breast in the U.S. has skyrocketed. Breast cancer is currently the most deadly type of cancer among middle aged women.

Genetics also plays a large role in the risk of getting cancer. Women with a family history of breast cancer who commit abortions are eighty times more likely to be diagnosed with breast cancer [2].

Approximately two percent of women between the ages of fifteen and forty-four have an abortion each year [3]. Half of these have had already had at least one previous abortion.

To a certain extent, the longer a child is breastfed and the more children that a woman gives birth to, the less likely a woman is to develop breast cancer. Women who start their families earlier also have reduced risks.

By changing our approach to childbearing, we can reduce the rate of cancer in women. Abortion is one of the biggest threats to the natural childbearing process, and this has been difficult to change. The more abortions a woman has, the greater her risk of breast cancer becomes. Hormonal imbalances play a large role.

Biologically, a woman is exposed to high levels of estrogen when she has an abortion early on in her pregnancy. This estrogen is linked to the development of breast cancer [4].

One possible reason for this is that post-abortive women cannot breastfeed, which is a natural process that occurs after giving birth. When the child begins to develop, a woman’s body and hormones prepare to nurture the child and give it the necessary nutrients to survive. Abortion deprives the woman’s body of the opportunity to give these nutrients away.

As of today, there are some groups that support both pro-abortion organizations and organizations that fight against breast cancer.

Isn’t this a bit contradictory?

One thought on “Multiple Abortions and Breast Cancer Link”