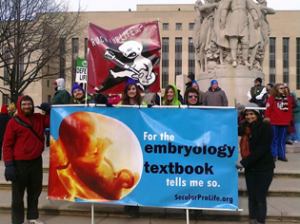 One of the most prevalent stereotypes about the pro-life movement is that it is dominated by older, conservative, white men [1]. While there are some in the movement who fit this description, the vast majority do not.

Those who are actively pro-life actually come from a wide range of groups.

In terms of religion, it should be noted that not all pro-lifers even identify with a religion. There are now Muslim, Atheist, and Jewish groups, in addition to those whose members are mostly Christian [3].

The most important point being made here is that abortion, at its core, is not simply a religious issue being advocated by any one type of person. Instead, it is a moral issue that many of those who are religious feel especially obligated to take action on.

No matter who you are or what your background may be, you can have a role to play within the pro-life movement.