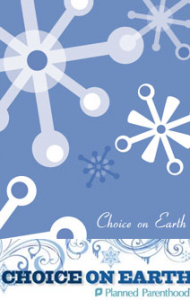 During the winter season, especially the Christian holiday of Christmas, it is common to hear the phrase “Peace on Earth.”

So, what does this phrase mean?

According to Webster’s dictionary, peace may be defined as

1) a state of tranquility or quiet

2) freedom from disquieting or oppressive thoughts or emotions

Promoting all of these things sounds great! What’s not love?

Because such a wide variety of people can resonate so strongly with this statement, the abortion industry, more specifically Planned Parenthood, has tried to put a new spin on this phrase.

Unfortunately for the pro-choice movement, the meaning isn’t quite the same.

In fact, it is the opposite.

Those who believe that abortion brings about peace or tranquility need do nothing more than actually ask the women who have had abortions about their experience to find out how very wrong they are.

The overwhelming majority of women who have abortions come to regret them later in life. Many post-abortive women experience depression and post-traumatic stress disorder, among other anxiety disorders.

The truth is that abortion is a form of violence against wisdom. It continues to inflict both physical and psychological harm on countless women.

Peace on Earth will only be possible once the horrific practice of abortion has ended.