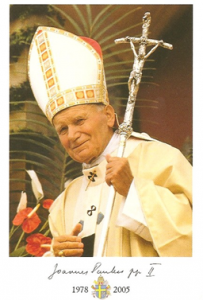 Pope John Paul the Great was known for his commitment to peace, love and justice.

Throughout his life, he showed his disdain for violence of all kinds, including war, terrorism and abortion.

However, he sought not to condemn, but to encourage all people to embrace the lives of their fellow man, no matter how young or old.

“The promotion of the culture of life should be the highest priority in our societies… If the right to life is not defended decisively as a condition for all other rights of the person, all other references to human rights remain deceitful and illusory.”

On another occasion, he discussed the topic of abortion more deeply, saying

“You are called to stand up for life! To respect and defend the mystery of life always and everywhere, including the lives of unborn babies, giving real help and encouragement to mothers in difficult situations. You are called to work and pray against abortion.”

According to John Paul, the family, whole, united and strong, is the key to a successful and peaceful society.