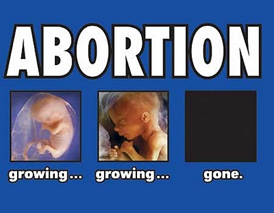 However, those who make this claim should accept this challenge:

Prove to me that abortion is not taking the life of a human being.

For example, if there’s rustling in the bush, would you shoot? If there’s a trench coat in the road, and it appears that a person might be inside it, would you just drive right down the road and hit it head on?

Many pro-abortion advocates argue that a child in utero is not viable human being yet.

Often, they will challenge pro-lifers to prove that a fetus is a baby—a human life.

When pro-choicers find that they can’t disagree with the indisputable fact that human life begins at conception, they instead focus on trying to say that the baby should still not be considered a person.

They are hesitant to accept that very early on in the development of preborn lives, babies already have a heartbeat, are growing, in need of nutrition, have brain activity, and cells that are very much differentiated from the mother. All of these developments point to the fact that the child is already alive.