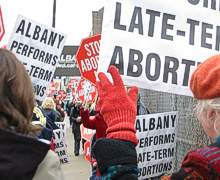 In their efforts to motivate their base, the abortion industry has sometimes come up with terms to try to portray pro-choice advocates in a positive light.

For example, they have sometimes referred to themselves as “Champions for Choice.”

These individuals being described must truly be some of the most brave and courageous among us, right?

Let us first take a quick look at what the word champion actually means.

According to Webster’s dictionary, a champion is

1. a warrior, fighter
2. a militant advocate, defender
3. one that does battle for another’s rights or honor
4. a winner of first prize or first place in a competition

A warrior? A fighter? A militant advocate?

Who exactly is the enemy here?

What the pro-choice always seems to leave out is the identity of their opponent – innocent preborn babies.

Of course, who can blame them? When one’s opponent is an innocent, defenseless child that is likely not something that anyone would really want to brag about.

The definition of doing battling for one’s right also seems rather ill-suited for pro-choice advocates, given that their main purpose is ensuring that the right of preborn babies to live is not recognized.

It is in fact the last part of the definition that is the most accurate of them all for the “Champions of Choice.”

Rather than trying to show love for both the mother and the preborn child, they view the situation as a competition. They believe that for one life to live, another must suffer.

Nothing could be further from the truth.