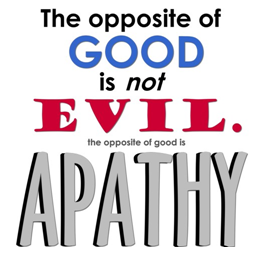 Some people argue that the government should completely abstain from getting involved in the abortion issue.

Those holding this view believe the government should neither fund, nor abolish it.

The fact that abortion destroys an innocent life aside, these people do not realize is that abortion really is also a society-wide issue.

Whether you like it or not, you are inexorably connected to abortion in some way.

Perhaps more than any other issue, abortion also calls into question the morality and values of the nation.

If we do not preserve and uphold the dignity of life, whether born or pre-born, then what is the basis of our government?

Abortion is an issue that you have to take a stand on. Either you completely support the protection of life or you do not. There is no in between.

Apathy and neutrality are not options—they are perhaps worse than actually taking a stand in favor of abortion.

Elie Wiesel, writer and Nobel Peace Prize winner, said “The opposite of love is not hate, it’s indifference” [1].