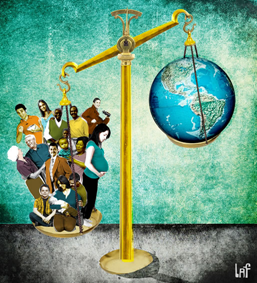 With the world population nearing seven billion people [1], we are sometimes confronted with the following argument:

“Shouldn’t we help those who are living in poverty and hunger before we bring more people into the world?”

While placing a heavy emphasis on helping those who are poor, starving, or in any type of suffering is a great thing, it is also important to realize that all lives have an equal right to live.

The lives of preborn children are already in existence from the point of conception.

There may be some people who choose not to have kids (or not to have a large number of kids) out of a concern for overpopulation, but this is much different than deciding to end lives that are already in existence.

Also, it should be noted that the value of life should come before everything else. Countless testimonies out there prove that it is possible for people to overcome humble beginnings and what may seem like horrible conditions.

There have been many great examples of people who were born very poor, but later contributed greatly to society, as world leaders or philanthropists.

For example, Oprah Winfrey was born into dire poverty. As a child, she even wore potato sacks as clothing [1]. For a time, it seemed that the greatest life she could hope for was being a maid to a white family.

However, Oprah was able to overcome many hurdles, got a college degree, a good job, and is now the only African-American billionaire. She has also made it her mission to help people who are in the same situation she was once in.

It is never anyone’s right to say another person’s life is not worth living and should be ended.