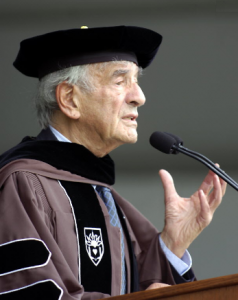 Given the horrors the world saw in the 1940s, with the Holocaust against the Jews, it may surprise you to learn that there is in fact a Holocaust still occurring today.

The Holocaust today is against the most vulnerable and innocent among us, preborn babies.

For nearly 40 years, we have been witnesses to the violence against these victims who are utterly incapable of defending themselves.

However, this genocide does not receive anywhere near the same amount of attention that the Nazi Holocaust once did.

This is largely because the violence being waged against the preborn is being done behind the closed doors of abortion clinics.

Many are not even aware of the magnitude of this problem.

The prevalence of abortion expands across most nations of the world, and accounts for approximately 42 million deaths each year [1].

Elie Wiesel, a Holocaust Survivor, argued that being silent and neutrality on the issue of violence and humiliation supports the aggressor and not the victim. More specifically, he said

“I swore never to be silent whenever and wherever human beings endure suffering and humiliation. We must always take sides. Neutrality helps the oppressor, never the victim. Silence encourages the tormentor, never the tormented.” – Elie Wiesel, Holocaust Survivor

Consider this a challenge to take a position on the issue, based on life, and not be afraid to share your views with those around you.

Be the voice for this silenced generation and encourage others to do the same.