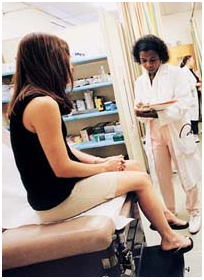 One of the worst accusations that can be made against an individual is the claim that he or she is racist. Former President George W. Bush even went as far as to say that the time he was labeled a racist by Kanye West was the lowest point of his presidency [1].

Because of this, it may seem odd to learn that abortion, one of the most racist practices in human history, has largely remained free of such criticism.

Studies show that approximately 40% of black pregnancies end in abortion [2]. Since 1973, approximately 16 million black babies have had their lives ended by abortion [3]. Although blacks account for less than 13% of the population, black women receive more than one third of all abortions [4].

The number of black babies killed by abortion is twice as great as the number of black deaths from AIDS, violent crimes, accidents, heart disease, and cancer combined [5]. It has been estimated that without abortion, the African American population would number over 50 million [6].

Why is this happening? How can this be?

To answer this question, it is important to look at who is committing these abortions in the black community. As of today, the nation’s largest abortion provider is Planned Parenthood. This is an organization that was founded by Margaret Sanger, a woman once said, “”We don’t want the word to get out that we want to exterminate the Negro population [7].”

Some have tried to brush aside this last point. Those who defend Planned Parenthood claim that the beliefs of its founder and its original mission have no influence on the organization today.

However many times this may be repeated, the facts speak for themselves. Planned Parenthood continues to target the black community to this day. Almost 80% of its facilities are located in minority neighborhoods [8].

As much as the abortion industry touts itself as being an invaluable resource for minority women, the facts speak for themselves. You cannot help a population by destroying its children and its future.