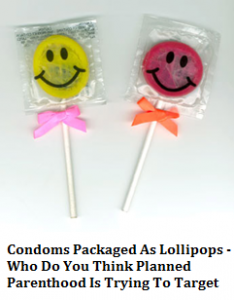 The abortion industry has a very well-designed plan to attract youth, especially young women, into using their services early on in their lives.

According to pro-life activist Joseph Scheidler, in the film BloodMoney (a documentary about the abortion industry), it can best be explained as follows:

Clearly, this reveals the abortion industry’s plan, especially that of Planned Parenthood. By coming into schools under the guise of wanting to help, they are actually getting children sexually active at increasingly younger ages.

In this strategy, the free condoms and birth control they offer (which are among the most cheap and least effective), may be best thought of as bait.

This bait allows Planned Parenthood to reel in these children and use them for everything they can.

While many people are under the impression that Planned Parenthood is a good organization to have for women’s health care needs, the truth is that all of the services they provide are offered elsewhere.

Fortunately, the public is becoming increasingly exposed to the true nature of Planned Parenthood.

Over the past few years, undercover investigations have revealed that the abortion industry appears to be far more interested in selling abortions than it ever has been in promoting the health of women.

Because of this, there is a great deal of hope that one day soon Planned Parenthood will be defunded and the abortion industry will be wholly rejected by the American people.

10 thoughts on “The Abortion Industry: They Believe in Getting Children Young”