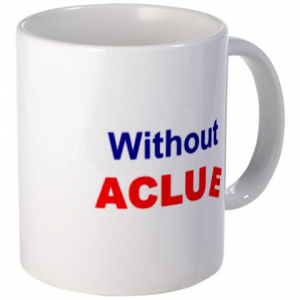 What would you think of an organization named the American Civil Liberties Union?

It sounds like it would be a pretty terrific organization, right?

Unfortunately, the name may be far too distinguished and noble for this organization.

While it publicly claims to take a stand for first amendment rights, protection from discrimination, due process, and privacy [1], the truth is that they only try to uphold their goal for those who share their point of view.

In many instances, the lives of those involved seem secondary to the political purpose they are trying to pursue.

Because so many within the ACLU’s leadership strongly support legalized abortion, it appears that preventing abortion clinics from being regulated is much more important to them than the health of women.

Especially in light of the horrors witnessed in the clinic of Dr. Kermit Gosnell and the revelation that abortion clinics in many places have not been following proper reporting procedures [3], it has become clear that more regulations are needed to protect the health of women.

Those who are against these regulations, such as the ACLU, hold a position that could mean a higher incidence of accidents, infections, and death for many women who undergo an abortion.

It is in fact those who support these types of legislation, those in the pro-life movement, who are taking a stand for the health of women.