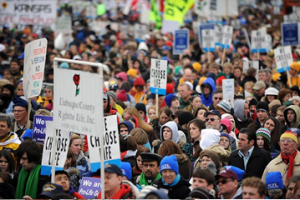 If you are a pro-life individual reading this article, odds are that you have felt at one time or another that you must be silent about your pro-life views. This might be somewhat understandable given the negative coverage of pro-lifers in the media.

Many people seem to be dissuaded from taking an active role in the movement because of how they believe they will be perceived. And, with such few numbers, pro-life meetings can feel much more like a support group than anything else.

While the current sway of public opinion polls are not what gives preborn lives rights, they are an indication of what many people have come to realize – that there are always better alternatives to abortion.

One thought on “The Pro-Life Majority: The Sound of Silence No More”