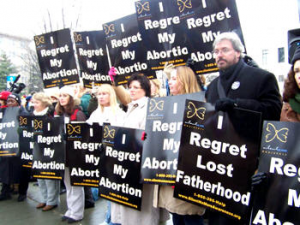 Those who listen to groups such as the National Organization of Women or NARAL may be under the impression that access to abortion is a fundamental women’s right.

The ability to “control one’s body” in this manner is thought to be liberating, right?

Actually, a large amount of research suggests that this is not exactly the case.

According to Dr. David Reardon, Since the 1980s mental health providers have been “treating an increasing number of women who are suffering mental and emotional difficulties as a result of induced abortions” [1].

Many times it has been found that these post-abortive women have been trying to repress their feelings from their abortions for years.

It is not yet clear how many post-abortive women suffer from this type of trauma. However, some of the key determinants of whether or not women develop severe cases of these types of problem are known. It appears that women are at higher risk if they felt pressured into the abortion or simply felt uncertain about their choice [2].

Considering that nearly 2 out of every 3 abortions involve coercion and that 83% of post-abortive women report they would have kept the child had at least one person encouraged them to do so, it is clear that our society is desperately failing these women in need [3].

Instead of being liberated, the practice of abortion has far too often led to an emotional imprisonment that stays with women for the rest of their lives.