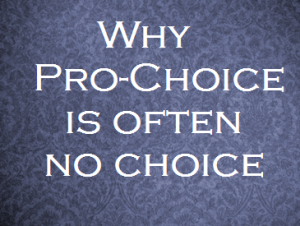 When women become pregnant, they are given the three choices:

2. Putting the child up for adoption

At this time women have all three choices to choose from. But 84% of woman who have had abortions report not being given enough information to make an informed decision [1]. Women often feel pressured by others to abort, uncertain of their decision at the time of abortion, and that they need more time to make their decision.

This is a significant problem. In order for a real decision to be made, all options have to be weighed out. Decision-making is very important, as it is typical to have a rational thought pattern.

This includes: noticing a problem, developing the options, evaluating the options to make the best possible decision, and then implementing the decision in order to address the problem.

Clearly, the lack of information is affecting the capability of women to make a level-headed decision.

Studies show that approximately 52% of women who receive abortions feel rushed into the decision [2]. Some people view this as solving the problem right away, which is the wrong way to view the situation. Due to the fact that a fetus is a life, ending that life is something of serious consequence that should be more fully thought out.

Also, 54% of women who have had abortions felt uncertain of their decision [3]. This is an issue; having uncertainty after an abortion can lead to regret. It may lead to Post Traumatic Stress Disorder, which is a mental disorder that occurs after a traumatic event.

Women are often surprised when they find out they are pregnant. When they are in a hard situation, picking one of the three choices is really difficult. In fact, 79% of woman who have had abortions were not even told about the other options available to them [4]. Information can be suppressed in numerous ways, including it being internationally hidden.

All of this is relevant to the decision making that goes into deciding on whether or not to undergo an abortion. This is because no one should make a decision too quickly. It is also surprising how uninformed women are when they make this decision. In order for these percentages to go down, more needs to be done to inform women of their options.