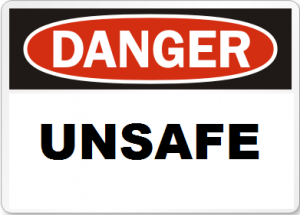 One of the arguments made by pro-choice advocates is that making abortion illegal does not reduce abortions, but merely makes them less safe.

While this argument has been debunked elsewhere, here we will take a look at what exactly an unsafe abortion is.

According to the World Health Organization, an unsafe abortion is one that is performed by someone lacking sufficient skills and/or a suitable environment in which to carry out an abortion procedure [1].

At first glance, the definition of unsafe abortions sounds pretty good. If the person performing the abortion is poorly trained and/or operating in a bad environment, then it’s not a safe procedure.

So, this must mean that with a good doctor and a good environment, abortions will be safe, right?

Actually, the reality is far different.

It is true that procedures that meet the criteria for being “unsafe” are much more likely to result in immediate harm to women. However, using the term “unsafe” to refer to these abortions implies that abortions with good doctors and a good environment are “safe.”

Not only does abortion always result in the death of an innocent, young life, but it has also been found to lead a long list of physical and psychological problems. These include an increased risk for breast cancer, anxiety disorders, and depression, among others [3].

The bottom line is that there is no such thing as a safe abortion.