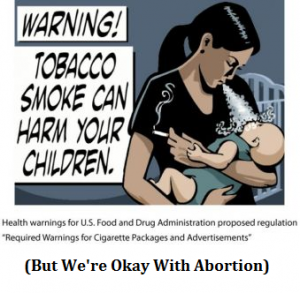 People these days are bombarded with warnings for just about everything. The warnings range from cigarettes to air fresheners.

In 2011, the United States Food and Drug Administration decided to take warnings for cigarettes a bit further by placing more extensive warnings and graphic images on cigarette packages [1].

To many people, this decision makes sense. Smoking has led to millions of deaths in America alone.

However, there is something wrong with this picture.

Given how dangerous abortion is and the harm it inflicts on preborn children, where are the graphic images to be show to women in abortion clinics?

Where are the warnings to inform women of all of the dangers that are associated with abortion?

Abortion is a procedure that should definitely have more prominent warnings explaining its risks.

Research has proven that abortion can cause a great myriad of harmful similar side effects, including PTSD, anxiety disorders, depression, drug depression, an increased risk of cancer, and death, among many others [2].

We owe far better to women than to keep them in the dark about these facts.