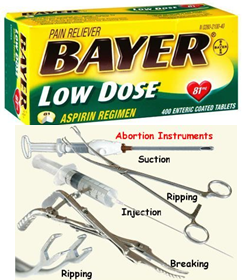 No matter whether or not a person identifies as being pro-life or pro-choice, almost all people can agree that having an abortion is a very big decision that can have both immediate and long-term consequences.

Because of this, it is not surprising that many states have laws requiring some level of parental involvement in the decision to have an abortion.

However, what is very puzzling is that some states that require parents to be notified before their (minor) daughter can receive aspirin would not require that same girl to have any parental involvement with the decision to have an abortion.

For example, Florida law requires that prescription medications or medicine must be distributed at school by a qualified individual, then should be counted, stored, and kept in its original container in a secure place. To receive them, parents must be involved [1].

As for abortion, however, there have been many cases in which the parents have not been told at all. In fact, even in states that generally require parental consent or notification, there have been many teens who have successfully evaded the rules (telling their parents) by means of judicial bypass.

When facing a crisis pregnancy, young women often find themselves in a difficult situation and feel that they are alone. Having laws for them to tell their parents might allow these young women to consider their decision a little more, and have a second opinion from someone who hopefully wants the best for them.

While some states have intervened to make it more difficult for minors to get an abortion, there are still may instances where they simply need to notify a parent (and not even ask for their consent) or can get around the process altogether.

What has our society come to when we are seemingly more worried about whether or not a girl can take a dose of aspirin than we are about a life-changing decision that can have a very harmful consequences for the young minor.