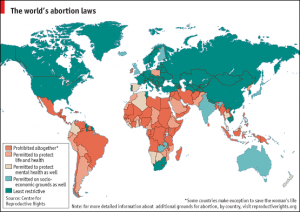 Abortion practice, abortion law and attitudes towards abortion all vary throughout the world. Abortion is a global problem and here we will take a look at some of the issues from an international perspective. It would be nearly impossible to be completely exhaustive as abortion is a very complex issue even on a local level. However, we plan to continue to update this article over time so that it encompasses a good understanding of abortion worldwide.

The abortion rate here is defined as the number of abortions per 1000 women of child bearing age (15-44 years old). International abortion statistics are even harder to collect and verify than are domestic. Remember this as you look at these numbers. There are many countries missing and the data is incomplete. This is, however the best we have as they do come from the United Nations.

Abortion Statistics in Republic of Georgia

(The above statistics come from the UN, Guttmacher Institute, the lancet)

There are different levels of legality of abortion around the world–countries obviously have varying standards and laws due to many different factors.

These laws are constantly changing so we will discuss some broad strokes here.

For example, countries that are communist or were previously communist generally have the most liberal laws with regards to abortion though this trend is broken by Poland [1]. For decades the soviet union was the most permissive, for example.

Countries with more moderate laws include Great Britain, Sweden, and Scandinavia, which allow abortions for either medical or mental health reasons [3]. Much of Europe is actually more restrictive on abortion that the United States.

Finally, nations that restrict abortions include many nations in the Middle East, Asia and Latin America. Despite these restrictions, approximately 20%-50% of all pregnancies in Latin America end in abortion [4].

Despite its illegality, there are many instances in which abortion still occurs behind closed doors. This highlights the important role of enforcement of abortion laws. Many people focus only on what the law says but not how it is actually enforced in practice. However, that’s still not enough.

Instead of focusing solely on the legality of abortion, we should turn our attention primarily to how we can better support women to make good decisions and help them care for their children when they might find themselves in difficult situations. 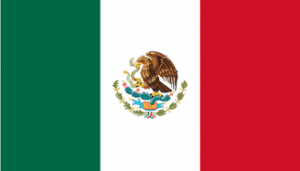 While much of the pro-life movement in America operates on a local, grassroots level, a statewide, or nationally, it is also very important for pro-life Americans to be concerned with the lives of preborn babies in other neighboring countries.

For example, one country that is very close to America geographically and heavily affected by American policies is Mexico.

As of today, abortion is generally illegal throughout most of Mexico, although there are exceptions made in some locations [6]. In places where exceptions are allowed, they are for cases that involve rape or severe fetal deformity.

However, in Mexico City, abortion restrictions are much less strict.

This is because lawmakers in Mexico, in 2007, passed a bill to allow abortions during the first 12 weeks of pregnancy [7]. Although this presents a huge step backwards in human rights, there is still a great deal of hope for this legislation to be overturned.

As in America, a majority of citizens in Mexico are very much against legalized abortion. 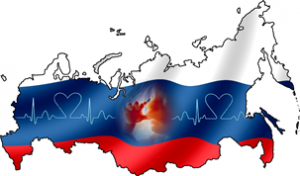 The abortion problem is so widespread that it affects all corners of the world. Each year, fifty-five million lives are taken by abortion throughout the world [8].

In fact, it appears the problem is getting even worse. Between the years 1998 and 2007, 16 countries liberalized their laws to allow for abortions to be performed in more situations [9].

Russia was the first country to legalize abortion in 1920. Now, it records more than seven million abortions each year—one of the largest numbers in the whole world. While the Soviet Union was intact, abortion was the main form of birth control and way to manage an unwanted pregnancy [10].

Furthermore, the fertility rate is approximately 1.4 child per woman, which is significantly less than the 2.1 needed to maintain the current population [11].

As of today, the United States records well over a million abortions each year [13].

No one is under the impression that ending abortion will be an easy task. However, that is not a reason to simply give up the fight. Through dedication, persistence, and promoting the cause worldwide, we can see an end to abortion within our lifetime.

One way in which pro-choice advocates have tried to justify abortions is to claim that those living in poverty will not be able to afford having children.

One of the many implications of this is that developed countries can be expected to have an abortion rate lower than that of developing countries. The wealthier the nation, the less demand for abortion.

At first glance, this does appear to be the case. Most abortions occur in developing countries—35 million annually, compared with seven million in developed countries [14].

These numbers inflated, misrepresenting the rates of abortion throughout the world.

There are numerous reasons that developing countries might have slightly higher rates of abortions. Poverty, government regulations and a lack of education may all be contributing factors.

One interesting piece of news that you may have heard is that the number of induced, surgical abortions worldwide has been on the decline.

For example, between 1995 and 2003 the number of abortions went from nearly 46 million to approximately 42 million. This means that as of today about one in five pregnancies worldwide end in abortion [16].

However, just because surgical abortions are on the decline does not necessarily mean that the total number of abortions is.

Instead, women are presented with less traditional forms of abortion.

Although prevention might be one cause for the decreased numbers, one of the most probable reasons for the decrease is access to the RU-486 abortion medication, which allows women to terminate their pregnancy within the first few weeks without having to undergo a costly and invasive procedure [17].

As mentioned before, one in five pregnancies throughout the world still end in abortion. Since it is so widespread, it affects billions of people each year. This makes it clear that abortion is not a social problem that will simply disappear without a fight.