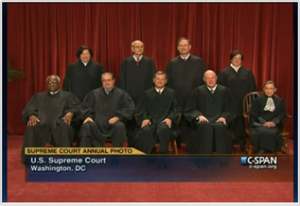 Roe v. Wade is without a doubt one of the most influential decisions in the history of the United States Supreme Court.

It was in this decision that it was decided that abortion would be made legal throughout all nine months of a pregnancy.

Because of this court decision, the Supreme Court has gotten plenty of criticism.

However, it is important to note that there is far from perfect agreement on how well the Court interpreted the Constitution in this case.

For example, here are just a few quotes from Supreme Court Justices who have publicly voiced their disagreement with the Roe v. Wade decision:

“Roe v. Wade … ventured too far in the change it ordered and presented an incomplete justiﬁcation for its action.”– Justice Ruth Bader Ginsburg [1]

“I ﬁnd nothing in the language or history of the Constitution to support the Court’s judgment” in Roe v. Wade. – Justice Byron White [2]

There are in fact a long list of quotes from other Supreme Court scholars, as well as other respected scholars of law, who have made statements very similar to these.

When the issue is as important as abortion, and millions of preborn lives are at stake, it is not too much for the American people to ask that the Court be able to come up with a decision that is not so seriously flawed.