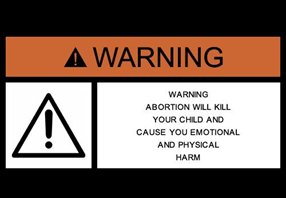 As devastating as it is that over 53 million preborn babies have been killed since the passing of the Roe v. Wade court decision in 1973, another heartbreaking result has been found to be the negative impact that abortion has on women.

While there are too great a myriad of negative side effects of abortion to be mentioned here, it should be mentioned that these side effects can be immediate or long-term. They can be physical, emotional, or psychological in nature.

For example, one study that compared women from Russia and women from the United States concluded that post-abortive women are at a significantly increased risk of developing PTSD and a host of other negative health issues after their abortion [1].

Similarly, a compilation of research collected by the Elliot Institute has revealed that post-abortive women tend to deliver children prematurely [2].

As has been mentioned elsewhere on this site, there are also a very large number of studies that have revealed that abortion causes an increased risk of developing breast cancer [3].

Given how prevalent abortion and harm from abortion has come, it has become painfully clear that our society has deeply failed millions of pregnant mothers in crisis situations.

This must change, women deserve the truth.