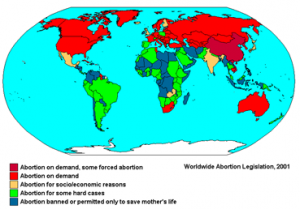 Every year, the United States spends millions of dollars in aid to other organizations and countries throughout the world.

This aid can take a variety of forms, most of them relatively non-controversial. However, one area of policy that is inherently controversial is abortion policy. For example, many citizens become upset when they learn that their money is going towards abortions, directly or indirectly.

Because of this (and the fact that the U.S. had a pro-life president), during the early 2000s funding was not allowed to be given to certain groups that provide abortion overseas.

In fact, international nongovernmental groups were not even allowed to advise, counsel or inform about abortion in foreign countries.

However, in early 2009, following the inauguration of a new, pro-abortion president, the United States’ abortion aid ban was repealed.

In addition, the so-called “gag-rule,” which prevented healthcare providers from sharing some abortion-related reproductive health information, was eliminated as well [1].

This has a widespread effect. Not the least of which being that pro-abortion groups are now receiving government funding.

While some hope that increased funding of abortion will reduce the number of unwanted pregnancies, the reality is that it will not. Instead, it will increase them.

It is important to realize that we need to go to the source of the problem, a high frequency of recreational sex, rather than simply try to limit the number of live births.

The effects of this abortion funding will have a devastating impact on women as well as society. Instead of helping those in other countries, our tax dollars are bringing them harm.