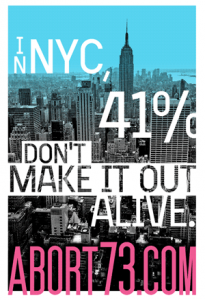 With its everyday hustle and bustle, New York City is one of the most populated cities in the United States.

New York City also has the highest rates of abortion compared to the rest of the United States.

Nearly forty percent of all pregnancies in the city end in abortion. This is about twice the national average [1].

The statistic is even higher for African Americans–nearly sixty percent of black pregnancies end in abortion. [2]

In many ways, New York City acts as a model and representation to the rest of the society about how America sees new life.

Despite the fact that New York City is full of some of the most wealthy people in the world, they have the highest levels of abortion.

Although some abortions result from health problems or other reasons, the vast majority, at least over 95%, occur because they are simply inconvenient [3].

At the very least, we are sending the message to the world that we are self-centered and are primarily just concerned with our own well-being.