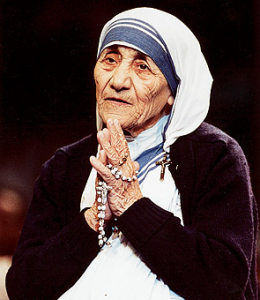 Mother Teresa was a woman who was inspirational to many, Catholic and non-Catholic alike.

Winning the 1979 Nobel Peace Prize for her extraordinary work with those in poverty, she witnessed many people in struggling.

What some people might not know is that her passion to help those in need actually transferred over to the pro-life movement as well [1].

In other words, she was asking what right for convenience could there possibly be when exercising that “right” actually means the death of an innocent, preborn child?

“There are two victims in every abortion: a dead baby and a dead conscience”

Abortion does not only result in a painful death for the preborn child, but the mother can also experience significant physical and/or emotional suffering.

It is very important that women be made more aware of both of these facts.

Theresa also pointed out the illogic in pro-choice reasoning. She said,

“If we can accept that a mother can kill her own child, how can we tell other people not to kill one Another?”

Today, abortion is socially acceptable; a mother can murder her own child. But yet, it is not okay for other people to kill one another. How is it that one is legally acceptable when the other is not?

Abortion is a violent act; it is the blatant destruction of a defenseless life.