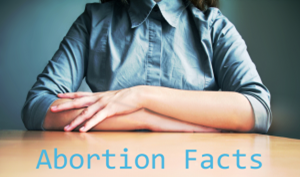 Below is an overview of the most fundamental facts. For a more in depth look, be sure to follow the links provided in each section.

While this is a pro-life website, we’ve gone to great lengths to find unbiased sources for the information below. Using bad information only hurts our case. Complete datasets on abortion statistics are hard to come by, so we do the best we can with what is available. For these reasons, we generally look to the Centers for Disease Control (CDC) and the Guttmacher Institute as sources.

The Guttmacher Institute is considered the research arm of Planned Parenthood and is clearly not on the pro-life side. The CDC abortion data is generally considered an unbiased source for this information but it is also known to be incomplete because states are not federally mandated to report their abortion statistics. For instance, states like California, Maryland, and New Hampshire, as well as large cities like Washington, DC have not reported their abortion statistics in years.

How many abortions are performed in the United States each year?

What is the current trend in incidence of abortion?

The number of abortions and the rate of abortion in the United States has been declining in recent years following the huge spike in abortions after abortion was legalized in 1973.

How many abortions have been performed in the united States since it was legalized nationwide?

Abortion was legalized nationwide by the Supreme Court in the 1973 decision, Roe v. Wade. Since then there have been approximately 53 million abortions performed in the United States. By now there have been more than 60 million. [1]

How old are women having abortions?

Here are the percentage of total abortions by age group followed by the approximate number of abortions as of 2014:

Abortions for Women Less than 15 years:

Percentage of all abortions: 0.2%

Percentage of all abortions: 8.3%

Percentage of all abortions: 33.6%

Percentage of all abortions: 26.5%

Percentage of all abortions: 15.9%

Percentage of all abortions: 9.1%

Percentage of all abortions: 3.1%

This means that women in their 20s accounted for the majority (60%) of abortions and had the highest abortion rates.  [guttmacher]

What percentage of pregnancies end in abortion?

What is the Race/Ethnicity of the Women having Abortions?

The Guttmacher Institute reports the abortion rates by race/ethnicity:

While blacks and Hispanics comprise only 31.5% of the population, they account for 53% of all abortions. This demonstrates a much higher abortion rate for minorities.

How does Economic Status Affect who has Abortions?

Poverty is often cited as the reason for needing legal abortion. In 2014:

Abortions on women with family income below 100% of the federal poverty level: 49%

The federal poverty level: $11,670 for a single woman with no children

How Many Abortions are Performed at each Stage of Pregnancy?

Many people draw the line of when abortion is permissible based on fetal development. The number of abortions based on the gestational age of the fetus are:

This means that ⅓ of abortion occur at 6 weeks of pregnancy of earlier; 89% occur in the first twelve weeks. [1]

What reasons do women give for having abortions?

Reasons most frequently cited in a 2004 Guttmacher Institute study were:

Younger women were more likely to report being unprepared to transition to motherhood. Older women more often stated that their responsibility to dependents was a major factor. [1]

In other studies, coercion is often reported.

Reasons given for having abortions in the United States.

What percentage of all abortions are because of “hard cases”?

The three most frequently cited “hard cases” in which some argue abortion might be justified are rape, incest and protecting the life of the mother. However, women rarely report that they are seeking an abortion for any of these reasons:

Source: Johnston, Wm. Robert. Reasons Given For Having Abortions In The United States. http://www.johnstonsarchive.net/policy/abortion/abreasons.html.

Is Abortion Ever Necessary to Save a Woman’s Life?

What are the Various Methods of Abortion?

Seven abortion methods are practiced in the U.S.:

A brief summary of each abortion method is below, full details are at each link.

How is a Suction (Vacuum) Aspiration abortion performed?

Suction aspiration, the most common abortion method, is typically performed when the fetus is 6-12 weeks, but can be used up to 16 weeks.  The cervix is dilated, and a hollow plastic tube with a sharp tip is inserted into the cervix and then into the uterus.  An aspirator attached to the tube tears the body of the fetus apart and suctions the pieces through the tube.

How is a D&C Abortion Performed?

In a D&C (dilation and curettage) abortion, typically performed in the first trimester, a curette (a sharp looped knife) is inserted into the uterus to scrape its walls.  The curette is then used to dismember the fetus and placenta.

How is an Intracardiac Injection Abortion Performed?

In an intracardiac abortion, a needle is guided into the fetus’ heart with the aid of ultrasound, and poison (often potassium chloride or digoxin) is injected, causing an immediate heart attack.  Intracardiac injection is most commonly used for “pregnancy reduction” abortions following in vitro fertilization (IVF) procedures, if multiple embryos were implanted to increase the likelihood of pregnancy.  In these cases, the procedure is typically performed between 10 and 12 weeks gestation.Intracardiac injection is also used in late term abortions when there is likelihood of delivering a live baby, in order to avoid state laws that would require the baby to be resuscitated and given medical care.

How is a Dilation and Extraction(D&E) Abortion Performed?

A D&E (dilation and evacuation) abortion is typically performed in the first half of the second trimester (13-20 weeks), but can be used up to approximately 28 weeks.  At this stage of pregnancy, the fetus’ tendons, muscles, and bones are more developed.  In a D&E abortion, forceps are inserted into the uterus to forcibly dismember the fetus, and the pieces are removed one by one. Larger fetuses must also have their skulls crushed so the pieces can pass through the cervix. Typically, the cervix must be dilated for a period of one to three days prior to a D&E abortion.  This is most often done by inserting laminaria (dried seaweed sticks) into the cervix.  Therefore, a D&E abortion usually requires two visits to the abortion facility.

How is a D&X or “Partial Birth” Abortion Performed?

A D&X (dilation and extraction) or partial-birth abortion is typically performed in the late second or third trimester.  As with a D&E abortion (see above), the cervix must first be dilated, usually with laminaria (dried seaweed sticks).  Forceps are then inserted into the uterus to grasp the fetus’ legs.  The fetus is delivered breech while the head remains inside the birth canal.  Using blunt-tipped surgical scissors, the base of the skull is pierced, and a suction catheter is inserted to extract the contents of the skull.  This causes the skull to collapse, and the dead fetus is then fully delivered. Despite the fact that the United States Supreme Court upheld the federal Partial-Birth Abortion Ban Act in 2007, D&X abortions are still being performed.  An abortionist can avoid violating the law by first injecting the fetus with a lethal intracardiac injection to ensure that the fetus will already be dead when it is partially delivered.

How is an Instillation (Saline) Abortion Performed?

In a saline abortion, amniotic fluid is removed from the uterus and replaced with a saline solution, which the fetus swallows.  The fetus is killed by salt poisoning, dehydration, brain hemorrhage and convulsions. Saline abortions, typically performed in the second and early third trimester, are rarely used today, due to the risk of particularly serious health complications to the woman.

How is a Chemical (Medical) Abortion Performed?

In a chemical abortion, also called a medical abortion, a woman is administered an abortifacient compound called mifepristone (also called RU-486 or Mifeprex). Mifepristone blocks the action of progesterone, the natural hormone vital to maintaining the lining of the uterus. As the nutrient lining disintegrates, the embryo starves.  Subsequently, the woman takes a dose of artificial prostaglandins which initiate uterine contractions and cause the embryo to be expelled from the uterus.  Abortions by mifepristone are usually done prior to 49 days gestation.

Now that you know some of the facts, learn how to share the pro-life message here and here, or keep learning with the links below.

Are males and females equally likely to be aborted?

This article deals with the gender differences among children who are aborted. The answer might surprise you. More on sex-selective abortion here.

This practice is already very common in India and China. The numbers world-wide are staggering (160 Million and Counting) and sex selective abortion is becoming more common in the United States.

Russia is an exception to this rule. Abortion was promoted heavily under communism and Russia is still suffering the effects of that. Russia has the highest abortion rate.

Probably the most extreme case internationally is China and their one-child policy. This doesn’t just affect the children being aborted and the mothers suffering from that decision (or forced abortion in many cases) but China’s one-child policy also affects the children who are born.

All this being said, the United States has played an active role in affecting abortion policy in other countries. One way this happens is through ‘foreign aid’ Do American taxpayer dollars go to fund abortions overseas?

All in all, the international abortion numbers are staggering. Of the 208 million global pregnancies, 41 million ended in abortion in 2008. This leads many to conclude that in fact, abortion is used for population control.

(For more information on access to abortion, please visit the Questions of Law page)