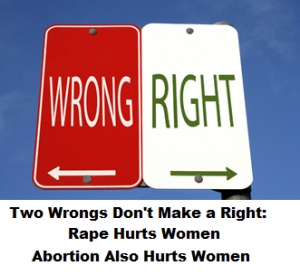 Those who defend abortion often try to bring up the “hard cases.” These include the involvement of rape, incest, or danger to the life of the mother.

This article will focus on pregnancies that are the result of rape.

Far from being callous towards victims of rape, those of us who are pro-life actually have every bit as much concern for the life and well-being of the pregnant mother as we do for the preborn child.

Everyone can agree that rape is a terrible act of aggression.

While the abortion industry has put great effort into creating the illusion that abortion can help make the pain go away, the reality is that it just makes the situation even worse.

If A harms B, that does not entitle B to harm C.

Again, this is not to say that the mother isn’t in a terrible situation.

What we are arguing is that legalized homicide of an innocent human being is not an ethical response to this terrible situation.

In fact, the supreme court has ruled that legalized homicide is not an ethical response to the rapist himself, by prohibiting the use of the death penalty against rape [1].

2 thoughts on “Abortion and Rape”