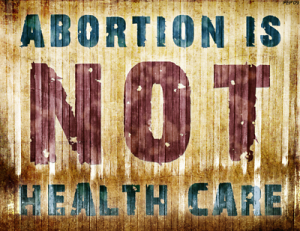 Health care today now covers a great variety of services that it did no not in the past.

Unfortunately, what most people do not realize is that many health care plans now cover abortions as well.

Given that most people believe abortion is morally wrong and should be illegal in all or most instances, this is an action that very much goes against the will of the people who pay for insurance.

Those who are pro-choice argue that not covering abortions is the same as denying women health care, but such an argument is seriously flawed.

This view assumes that abortion can be both healthy and necessary for women facing unplanned pregnancies.

However, even a brief examination of the facts regarding abortion reveals that neither is true.

Far from being healthy for women, it has been found that abortion can cause a great variety of physical and psychological harm to women [1].

To those who believe that there are some instances in which abortion can be necessary, it is important to remember a few key points:

– Even in cases of rape or incest, the innocent preborn child did nothing to deserve having its life taken away and, even in these instances, abortion will just make the situation even worse.

Health care is supposed to be about keeping people healthy. It should cover important procedures, such as getting one’s appendix removed.

It should not cover procedures that always takes one life and often destroys another.

[2] Johnston, Wm. Robert. (2011). Reasons Given For Having Abortions In The United States. http://www.johnstonsarchive.net/policy/abortion/abreasons.html.

[3] Rice, Charles E. “No Compromise” and “‘Life of the Mother’ Is it Needed in Legislation?” by J.C. Willke, M.D. published in the July 2000 issue of Life Issues Connector