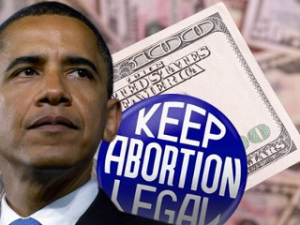 Funding for abortions has consistently been increasing over the past several years.

This trend was continued in 2010, when a new health care reform bill was signed into law.

This new law marks an even more decisive shift in favor of abortions in the United States.

Under this new legislation, the Patient Protection and Affordable Care Act (more commonly known as ObamaCare), state insurance providers will include plans that cover abortion procedures. These state exchanges will be supported by federal subsidies [1].

One of the provisions of this law allows the Secretary of Health and Human Services a significant amount of leeway to mandate various stipulations regarding abortions [2].

There are virtually no limits to abortions in this new legislation.

Private insurance companies are now required to cover preventative care, and one loophole of this law is that the federal government has been given the authority to define exactly what preventative healthcare includes.

So, what this means is that all insurance plans might be made to have to cover abortions.

In fact, unless abortion is specifically left out, it will be included in health care laws, as interpreted by the courts.

2 thoughts on “Expansion Of Abortion Funding Under Obama Care”