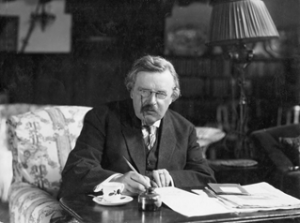 A man well-known for taking a stand on moral issues, GK Chesterton expressed his views through writing.

Many consider him to be one of the most talented writers of our time.

One issue he felt very strongly about was the sanctity of human life.

This strength of this belief may have been influenced by his Roman Catholic faith, but the basis of his belief had nothing to do with religion.

“The most unfathomable schools and sages have never attained to the gravity which dwells in the eyes of a baby” [1].

This quote captures the essence of the pro-life movement, which is the future as seen in the eyes of a child.

Our young are so full of innocence and capabilities that are not yet known.

Why would anyone want to destroy that through abortion?

One of the most absurd pro-choice claims is that those who are pro-life do not like or care for the baby after he or she is born. In fact, pro-lifers find equal importance of life inside and outside of the womb.

The gravity in a baby’s eyes, showing such extreme happiness for life, is one of the most beautiful things in the world.