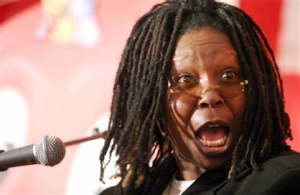 In May of 2005, Actress Whoopi Goldberg implied that without legalized abortion, many children who would have otherwise been aborted will suffer abuse from their parents later in life [1].

However, there are serious flaws in Goldberg’s logic.

First, studies have actually shown it is in fact abortion that tends to lead to child abuse [2].

This is thought to be because of the negative effects that abortion has on the psychological state of post-abortive women.

Second, it seems very strange to argue that taking the life of children early on is better than risking they experience hardship in their early years.

The fact is that people are not perfect, and we will never live in an ideal world. However, this does not mean that it is better to give up on the lives of the preborn altogether.

Instead, we should make every effort to provide these children with their most basic needs. There will always be certain children who are faced with more than their share of problems, but given the choice, it is undeniable that these children would prefer to have the chance to life.

We would not have wanted anything less for ourselves.