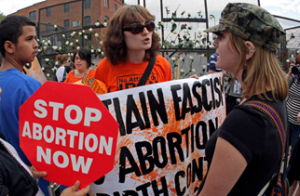 Pro-life students, as well as faculty, often feel the pro-choice pressure in higher education and in the public forum.

Pro-life students often find themselves in difficult situations—having to decide whether or not to take a stand for what they believe in, even if it is unpopular, or to passively sit back and watch.

This happens in classrooms, on campuses, and in activism events, and also in communities.

This means that you need to know your rights regarding freedom of speech.

In several cases, students have been restricted from certain kinds of activism.

On one Minnesota campus, students were even arrested for displaying graphic images on the campus’ main thoroughfare [1].

Another student was arrested for disorderly conduct for simply silently praying outside of an abortion clinic. The charges were later dropped as there was no basis for the charges [2].

Obviously, it is important to respect laws and regulations, but sometimes schools’ policies are absurd and go against the very freedoms established in the United States Constitution.

In these cases, it is important to remember that the Constitution is a document that far supersedes the authority of any set of policies a particular university may try to set.

The importance of taking a public stand against abortion cannot be overstated. You should never feel afraid to speak up and make sure the pro-life view is heard, especially when you are in class.

It is your right as well as your responsibility to share your thoughts and values!

One thought on “Take a Stand Against Abortion: Be A Voice For Those Who Have None”