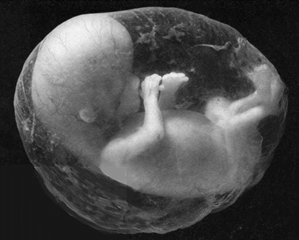 Within the pro-choice movement, there are a great variety of ways that pro-abortion advocates try to diminish the value of human life.

One such way is by pointing out that perhaps as many as 60-80% of fertilized embryos are naturally flushed out in a woman’s normal menstrual flows, without the women even being aware [1]. In other words, this does not include miscarriages.

Whether or not these percentages are accurate, it is known that there are many preborn lives lost in this way.

However, because these lives are not ended intentionally, they are referred to as spontaneous abortions.

In contrast, abortions that are performed on women intentionally are called induced abortions.

But what exactly are pro-choice advocates trying to say with this argument?

That the loss of life being unintentional makes it completely okay for preborn fetuses at the same early stage to have their lives ended intentionally?

Even pro-choice advocates have to admit that this is flawed logic.

There can be no denying the fact that human life begins at conception. Whenever life is ended after this point, it is a tragedy, and the loss of life being unintentional can never legitimately be a reason for that life being thought to have less value than any other life.