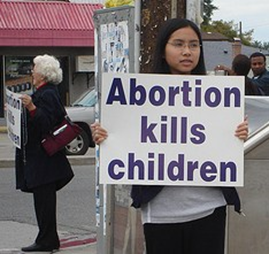 There are many different types of abortions that can be performed, and they are generally equally gruesome.

However, the winner for the most appalling type of all is partial-birth abortion.

A partial birth abortion occurs late in the pregnancy.

The process involves removing the fetus intact by dilating a pregnant woman’s cervix, then pulling the entire body out through the birth canal [1].

After the baby is pulled through the birth canal the physician then uses an instrument to puncture the base of the skull, which collapses the fetal head [2].

This is both graphic and an unnecessary procedure at this late in the pregnancy.

About 2,200 D&X/partial-birth abortions (or about 0.2 percent of the 1.3 million abortions) are believed to be performed each year [3].

Even though this is a small percentage of all the abortions nationally, this is still a terribly big number. At the time a partial birth abortion occurs, the baby is already fully developed and has been capable of feeling pain for quite some time.

Having an abortion this late in the pregnancy is illogical. At this point, the mother is simply delivering her child just too intentionally murder it. If we can save just 2,200 babies from this tragic ending, then the fight is all worth it.

One thought on “Which is the Most Gruesome of them All? Partial Birth Abortions”