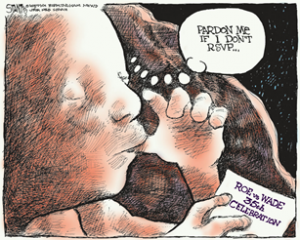 Although many people may not be well-informed about abortion in general, most have at least heard of the court decision Roe v. Wade, the case which legalized abortion in the United States.

What you might not know, however, is that Norma McCorvey (who used the name Jane Roe in the court case), the former plaintiff in the case, is now pro-life.

This conversion did not come over night. McCorvey herself once said in her past

“When pro-lifers called me a murderer, I called them worse. When people held up signs of aborted fetuses, I spit in their face.” [1].

However, over time McCorvey began to realize that she had made a huge mistake in bringing about her lawsuit.

One reason for this was because in 1973, the two young lawyers who McCorvey went to were most interested in just finding a young women who could be a plaintiff for an abortion case, to challenge the courts into making a decision on abortion.

Although she did not follow through with the abortion, and in fact gave up her child for adoption, McCorvey is now forever linked to the abortion becoming legal.

She has seen firsthand how women are degraded as a result of abortion and is now one hundred percent pro-life [2].

McCorvey is currently a pro-life activist, attempting to spread the horrors of abortion to the women of our generation.