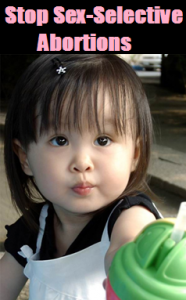 Gendercide: In places such as “India, China, and elsewhere in the developing world,” the increasing prevalence of sex-selective abortions has resulted in very significantly off balance sex ratios. It was estimated that more than 100 million women were “missing” in 1990, and that number today is thought to be 160 million.

This is obviously ironic since the abortion advocate normally proclaims abortion as an instrument of empowerment for women. While abortion hurts women in many ways, sex-selective abortion is probably the single most clear cut way. Women are so devalued that their lives can be disposed of in the hopes of conceiving a boy in the future.

This poses an embarrassing and awkward problem for the pro-choice feminist who far too often have gotten away with trying to rationalize abortion by saying it empowers women.

What about these (very young) women? How are they empowered?

Not only that, but where are the pro-choice feminists coming out to challenge and protest this grotesque practice?

There are many pro-life organizations out there trying to educate people on the reality of gender based abortion. However, the most effective and prominent is probably All Girls Allowed.  They are specifically focused on China and their population control laws that combine with a culture that values boys over girls. This, of course, has devastating affects.

Increase in Abuse of Women

According to Wikipedia: “Some scholars argue that as the proportion of women to men decreases globally, there will be an increase in trafficking and sex work (both forced and self-elected), as many people will be willing to do more to obtain a sexual partner (Junhong 2001). Already, there are reports of women from Vietnam, Myanmar, and North Korea systematically trafficked to mainland China and Taiwan and sold into forced marriages. Moreover, Ullman and Fidell (1989) suggested that pornography and sex-related crimes of violence (i.e., rape and molestation) would also increase with an increasing sex ratio.”[wikipedia]

This killing of very young girls isn’t just happening in the womb. In many places that are unable to determine gender before birth, female infanticide is also widely practiced.

Sex Selective Abortion in Around the World

In the United States, we often hear that those who are in favor of access to abortion want to make abortions safe, legal, and rare. There are some who even try to promote it as a fundamental women’s right, despite the wide body of evidence suggesting that most abortions are coerced and that abortion itself results in great harm to women.

Yet, in some countries, there is no such attempt to justify abortion in this manner. For example, individuals in some countries outright admit that they use abortion to manage the population or skew the natural gender ratio.

Tens of millions of children, mostly girls, have been aborted only because of their gender [2]. This is especially rampant in Asian countries. However, this practice is by no means limited to Asia.

In fact, sex-selective abortion has now made its way to the United States.

American women are now able to use an ultrasound to determine the gender of their babies, and then decide whether or not to abort them.

This can be done at approximately eighteen weeks into the pregnancy.

In societies where family sizes are limited, parents are more likely to choose to keep male children who will carry on the family name and have greater capacity to make money.

Far from leading to the empowerment of women, using abortion as a means to eliminate female children is perhaps the worst form of misogyny possible.

In spite of this bad news, there are some positive developments that have been taking place. For example, India has already taken the lead in eliminating sex-selective abortions, but not before nearly ten million lives were lost to it [3].