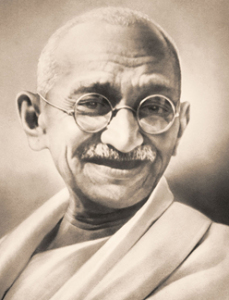 Known by many as one of the most peaceful people to have ever lived, Mahatma Gandhi was arguably one of the greatest leaders of all time.

As important as his goals were, he always remained dedicated (above all) to using non-violent means. His peaceful approach is looked upon fondly by pro-lifers everywhere because the pro-life movement is a non-violent movement.

“You must make the injustice visible and be prepared to die like a soldier to do so.”

Gandhi encouraged all to take a stance against grave injustices that others may try to keep hidden. Sound familiar?

Pro-lifers will resonate with that quotation because abortion is so rarely talked about without euphemisms. Abortion is one such injustice that Gandhi felt very strongly about.

In fact, Gandhi is quoted as saying:

“It seems to me as clear as daylight that abortion would be a crime.”

While the abortion industry has put a great deal of effort into portraying pro-life advocates as being violent and hateful, the vast majority of pro-lifers are most interested in showing genuine love and compassion.

Similar to Gandhi, each of us are called to make the injustice of abortion visible in a non-violent way. We must be prepared to put our life on the line for our brothers and sisters in the womb, and tirelessly defend their rights to life – in the most peaceful way possible.

One thought on “Mahatma Gandhi’s Views On Abortion”